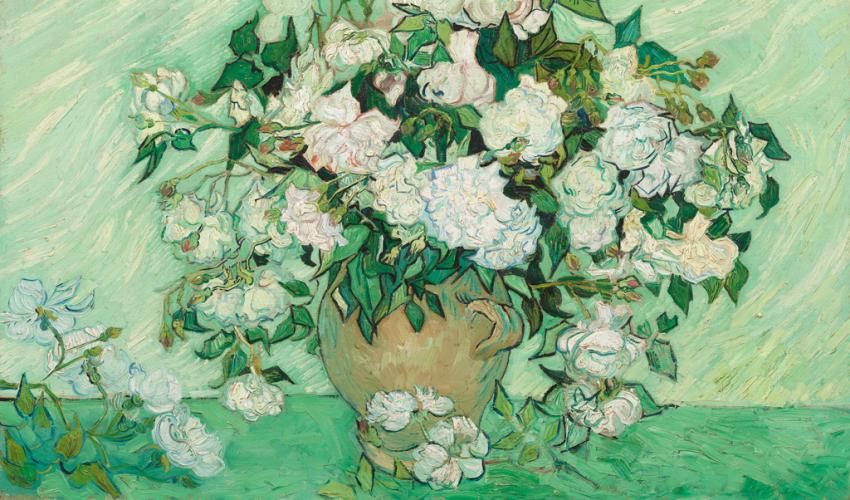 I do want to recommend the current exhibit at the Santa Barbara Museum of Art, Through Vincent’s Eyes: Van Gogh and His Sources. My recollection is that there were no women artists in the exhibit, however as an art historian I truly enjoyed a look at some of many influences on Van Gogh’s art. I was quite impressed with massive scholarship involved to create such an exhibition. One of the highlights for me was a gorgeous painting by Corot. The exhibition is also the first to include 17 first-edition novels revered by Van Gogh, including those by Charles Dickens, George Eliot, Victor Hugo, and Harriet Beecher Stowe. Thru May 22, 2022.

Womanhouse at Anat Egbi aims to situate the  landmark installation from 1972 within a larger conversation about this “underhistoricized and productive experimental period of Southern California Feminist Art History”.  I do recommend visiting this new vast gallery space on Fountain Ave. in Hollywood.  It was interesting to see examples plucked from the original Womanhouse space out of their original context. However, for those unfamiliar with the original installation, there was a nice “taste” of the past interspersed with other works all by women artists keeping with the very feminist theme.  Some of the highlights here were the videos including Faith Wilding’s Waiting, and works by Miriam Shapiro, Judy Chicago, Nancy Youdelman, and Karen Le Cocq. Thru April 16, 20222. Genevieve Gaignard  is an L.A.-based artist whose work focuses on photographic self-portraiture, sculpture, and installation to explore race, femininity, class, and their various intersections. Strange Fruit at Veilmetter Los Angeles features her photographs and mixed-media pieces many addressing America’s relationship to racial violence. This exhibition marks her most extensive and provocative body of work to date, focusing on historical and modern-day acts of lynching. The title, borrowed from Billie Holiday’s iconic song, interfaces a range of unapologetic commentary on the American psyche, simulating its inseparable tie to the horrors visited upon black people. This work emerges against history’s recent spate of calls for racial justice and draws attention to this country’s racial progress—or lack thereof. “Strange Fruit asks: Do you only want to see what you believe?” Thru May 7,  2022. 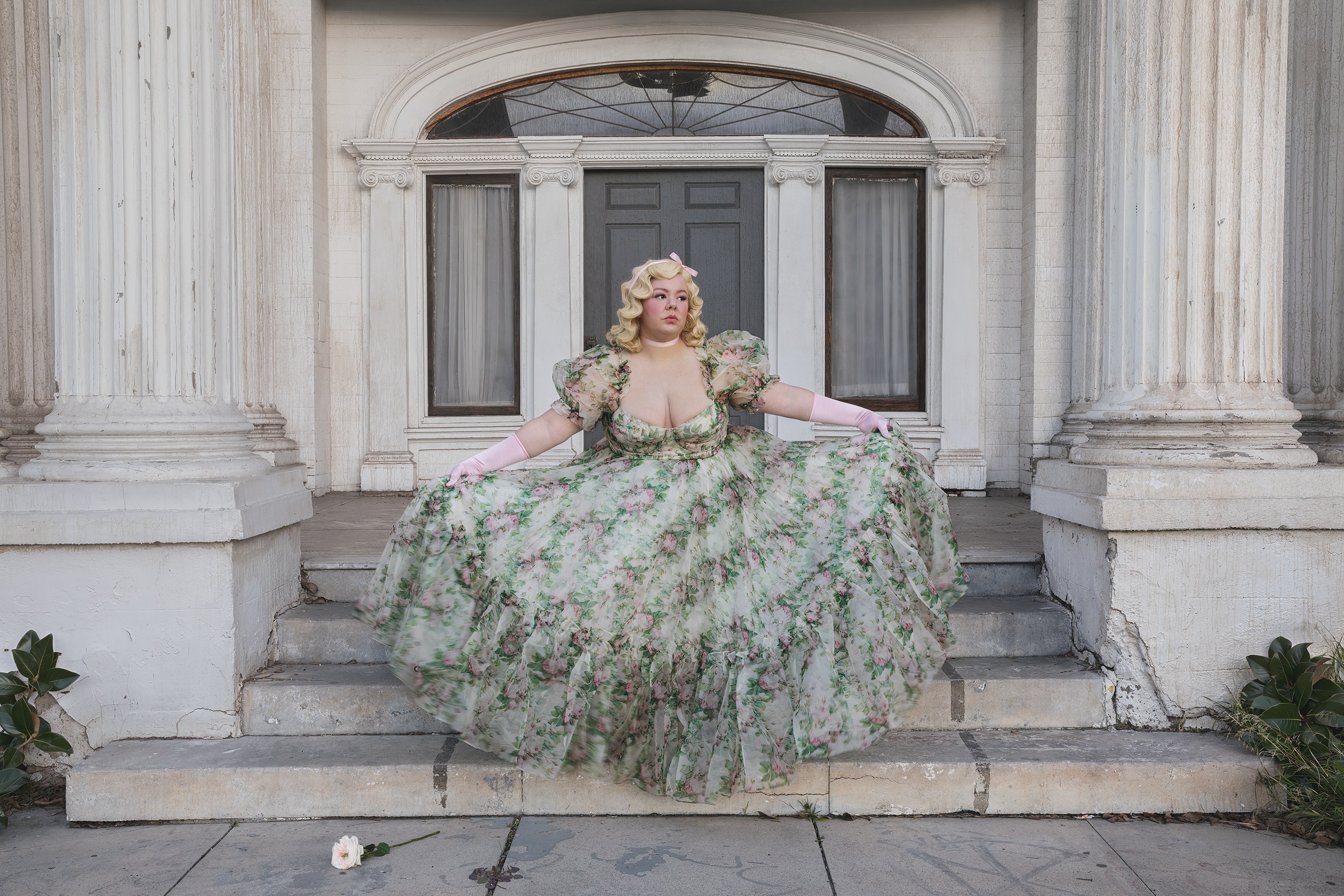 With Earth Day just around the corner, of special interest may just be a site-specific mural on the facade at the Institute of Contemporary Art ( I.C.A.),  Minerva Cuevas: Female Earth. Originally commissioned as part of the exhibition Witch Hunt, the Mexico City-based artist has created Female Earth (2021) which reflects upon ideas of ecofeminism, informed by Carolyn Merchant’s 1980 book, The Death of Nature, which explores how the exploitation of both women and the earth expanded during the scientific revolution. The female body is a focal point amidst imagery of the landscape, pointing to ecological movements that link women directly with nature. A call to action in a state experiencing rising temperatures, fires, and drought because of climate change, Female Earth is in keeping with Cuevas’s longstanding interest in intervening in public spaces to agitate for change.  (ICA). 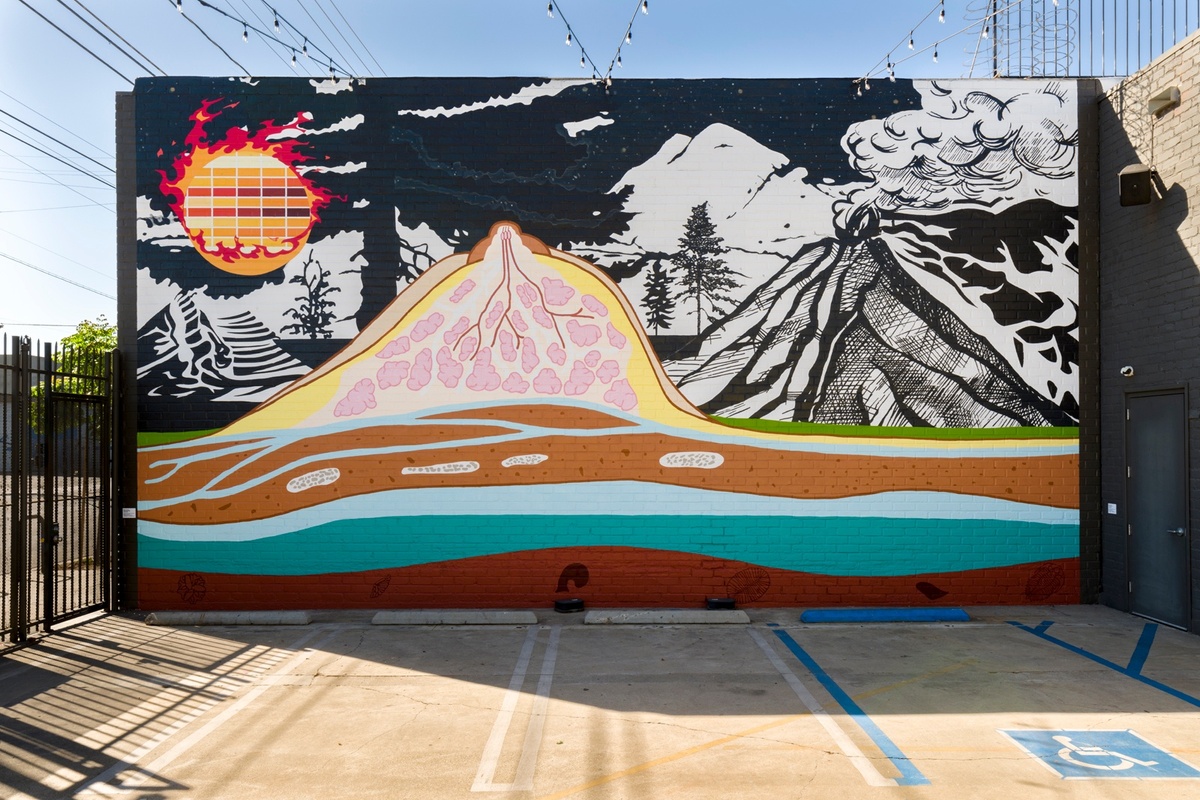 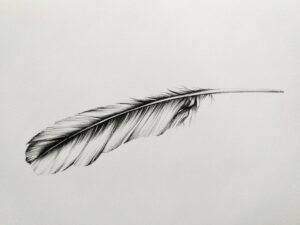 Shulamit Nazarian presents Low Relief, an exhibition of work by New York-based artist, Wendy White. The artist will present two new bodies of work: the After Calder series and a group of new epoxy resin floor sculptures. Also on view will be a large-scale mobile situated at the entrance to the gallery.
The exhibition’s title, Low Relief, takes on a double meaning: as an art term, it relates to low relief in sculpture, yet it also suggests a release from anxiety or distress. In confronting these two concepts at once, White lays out a visual landscape that is both peaceful and jarring, foreign and familiar.  Thru May 7, 2022.

One of the current exhibitions at the Getty Center  is a retrospective of the photography of  Imogen Cunningham.  The Getty: “In a career that spanned seventy years, Imogen Cunningham created a large and diverse body of work — from portraits, to nudes, to florals, and to street photographs. In a field dominated by men, she was one of a handful of women who helped to shape early modernist photography in America. This exhibition seeks to acknowledge her stature as equivalent to that of her male peers and to reevaluate her enormous contribution to twentieth century photographic history.” I had the pleasure of viewing this exhibit just last week, and I found it be quite thorough with so many outstanding examples of Cunningham’s work and I highly recommend it.  Check out this amazing work by Ruth Asawa hanging in one of the galleries. (see image right) Thru June 12, 2022. 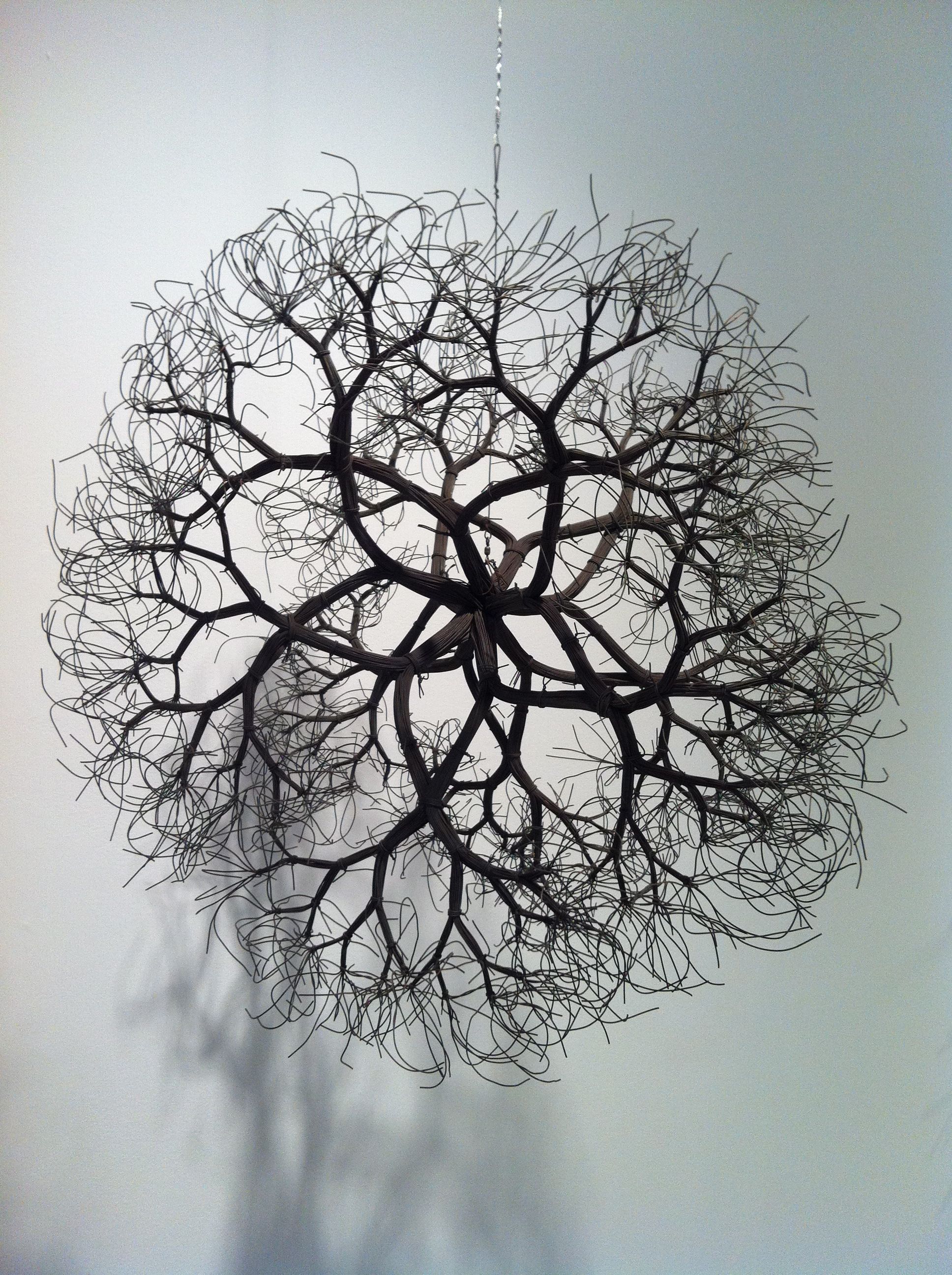 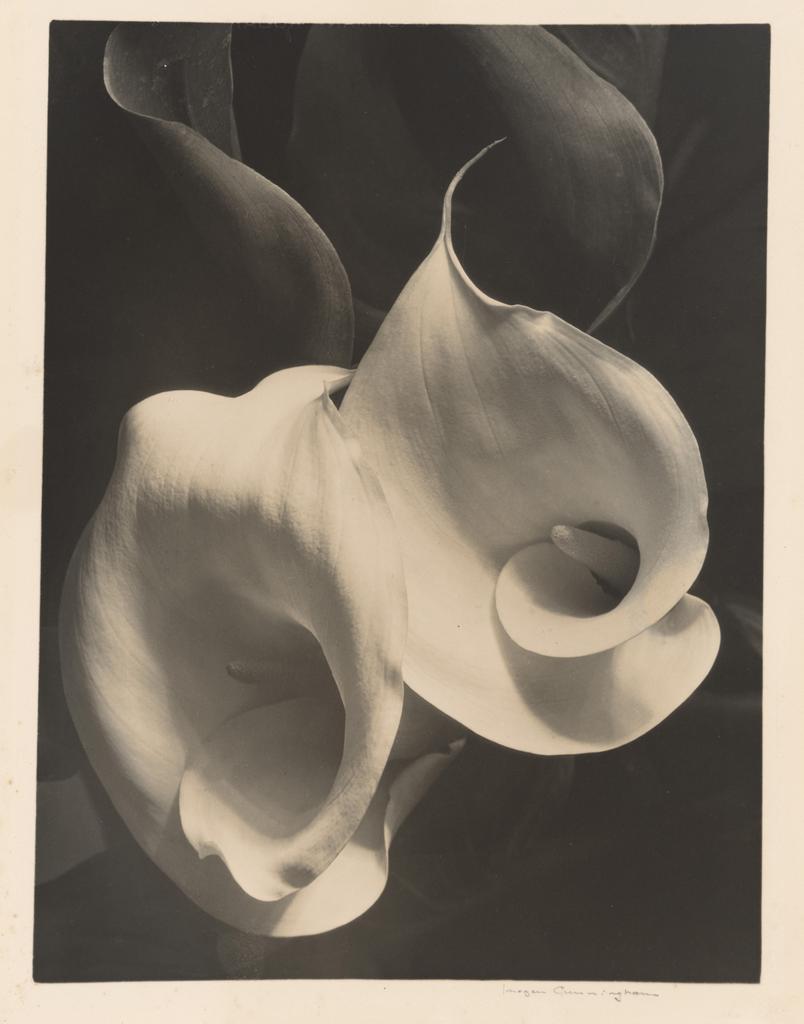 LACMA  presents the long-awaited retrospective, Barbara Kruger: Thinking of You. I Mean Me. I Mean You. Spanning four decades, this exhibition is the largest and most comprehensive presentation of Kruger’s work in 20 years; it spans her single-channel videos from the 1980s to digital productions of the last two decades, and includes large-scale vinyl room wraps, multichannel video installations, and audio soundscapes throughout LACMA’s campus. As an active consumer and vigilant viewer of popular culture, Kruger grapples with the accelerated ways pictures and words instantaneously flow through media.  Thru July 17, 2022.

The California African American Museum  (CAAM) presents Debra Roberts: I’m, curated by Heather Pesanti. Deborah Roberts critiques notions of beauty, race, and identity in contemporary society through the depiction of Black children through collage.  The artist’s mixed-media works on paper and canvas combine found images, sourced from the internet, with hand-painted details in striking figural compositions that invite viewers to look closely, to see through the layers.  CAAM will display a large-scale mural by Roberts installed on the walls of the Museum’s expansive lobby. Entitled Little man, little man (2020), the mural features collaged images of a young Black male figure in animated expressions of joy. The artist titled this work after author and civil rights activist James Baldwin’s Little Man, Little Man (1976), a children’s book articulating the triumphs and struggles of Black childhood through the adventures of a four-year-old boy in Harlem, New York. Thru August 20, 2022.

Daisy Hightower: An Installation by Rosalyn Myles  is one of  the current exhibitions  at The Contemporary Craft  In this exhibition, Los Angeles-based artist Rosalyn Myles uses the traditional epicenter of family gatherings – the table and tablecloth – as a vehicle to tell her maternal grandmother’s life story. Through a range of fabrics, wall treatments, and domestic wares, Myles creates a visual narrative of Daisy Hightower’s life (1904 – 1980), encompassing her grandmother’s impact on Myles’ own family and reflecting on the shared experiences of many Black American families through those decades. Thru May 8, 2022.