Women Around Town by Karen Schifman

Cendrillon is a body of work by Cara Barer at Laura Korman Gallery at Bergamot Station. “Cendrillon” — French for “Cinderella” — is also synonymous with fantastic transformation. This Houston-based artist uses the pages of discarded novels, phone books, dictionaries — even a Windows 95 user manual and repurposes them. She takes these pages and dyes, ruffles, and arranges them in circular forms, elegantly twisting the bindings. Echoing spiritual mandalas or blooming flowers, these altered pages are reborn as vibrant sculptural objects before being photographed. Barer explains: “I arrive at some of my images by chance and others through experimentation. Without these two elements, my work would not flow easily from one idea to the next.” Thru 7/23/16.

Alison Saar: Silt, Soot, and Smut: is the current exhibit at L.A. Louver Gallery. I don’t usually play favorites but Alison Saar is such an amazing artist and I cannot wait to see this body of work. There is nice video of her working on the  gallery website. Thru 7/7/11. 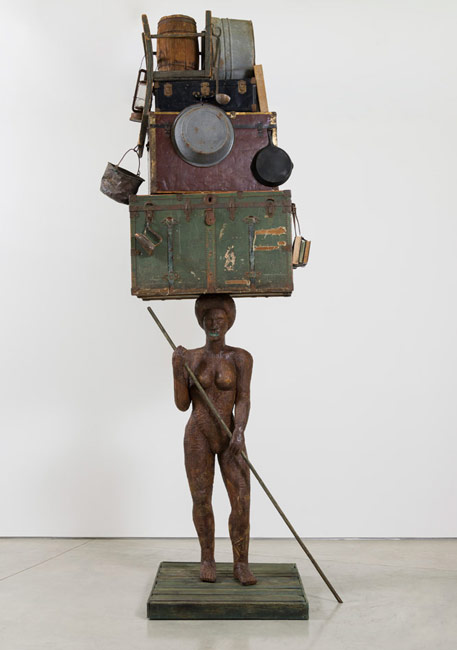 SCWCA member, Sandra Lauterbach’s solo exhibition , Materials Matter is exhibited at the L.A. Artcore Brewery Annex. Lauterbach’s art is comprised of textiles and thread. She creates exquisite contemporary quilts and artworks in which she carefully crafts and manipulates her materials. She is influenced by personal as well as universal history, and her travels in creating these very contemporary works. “Thread, fabrics and yarn are my paints. Instead of brush strokes, I stitch. I see strength and power in the stitch…it’s a way of leaving a print to be remembered.” 6/2-6/26/16. Opening reception: 6/5/16; 1-3 p.m. Artist Q & A 2-3 pm.

Lena Moross’ For the Love of Carmine will be the next exhibit at MuzeuMM, The Russian-born. Los Angeles-based artist takes her audience through the experience the life of a transgender male through the eyes of an artist whose only focus is the beauty of the human spirit. This installation of paintings and staged video reveals the artist’s own journey of finding a way to voice to this narrative, Moross met Carmine Messina on a street corner in Hollywood. “Struck by the older transgender woman’s gentle demeanor and self-possession, she began a conversation that has continued for more than three years.” She has created large-scale watercolor portraits of this transgender woman, that show the development of their intense ongoing dialogue revealing Carmine’s complex life.  “I have a never-ending fascination with this man who never professed to be anything special,” says Moross.  “It started out as an attraction to a beautiful person, then the story of transgender gradually came out.” Many hours of recorded conversation and video, hundreds of snapshots, paintings and sketches, explore the individual who is Carmine. Opening reception 6/11/16; 7-11 pm.

Marilyn Minter Pretty/Dirty continues at the Ocean County Museum of Art in Newport Beach. Thru 7/10/16.

Don’t Look Back: The 1990s at MOCA comprises works from MOCA’s permanent collection that identify the recent decade’s key concerns and transformations. During the 1990s artists expanded and challenged identity politics that were a driving force in the 1980s. Artists turned to large-scale installations addressing the relationship between the public and the museum, or to articulate the realms of overlap and dissonance in individual and public identities. The exhibition includes works by Catherine Opie, Cady Noland, Sarah Sze, Christina Fernandez and Barbara Kruger, among others, and explores the complexities of the period by dividing the presentation into six thematically grouped sections, titled: Installation; The Outmoded; Noir America; Place and Identity; Touch, Intimacy, and Queerness; and Space, Place, and Scale. The exhibition is organized by MOCA Chief Curator Helen Molesworth. Thru 7/11/16. 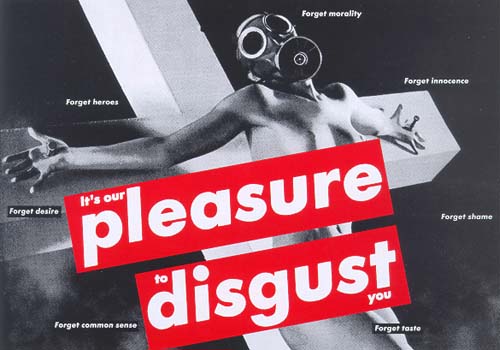 The exhibition of work by  Jane Szabo continues at the Lancaster Museum of Art and History (MOAH) Self Portrait as Self Investigation is a study of self by this Los Angeles based photographer. She pushes the boundaries of the traditional self portrait by finding new ways to express personal identity. In a intimate narrative that also speaks to how women construct their identities in society, Szabo photographs her struggles with order that is imposed from outside but also from within. She photographs dresses she has created from familiar objects such as coffee filters, road maps and dental x-rays. The carefully constructed dresses give us insight into who the artist is, is not, or wishes to be. Then, drawing from her own background, Szabo creates still life images, pairing objects with the dresses, creating a story, and inviting the viewer to contemplate the connections, and create their own mythology.  Thru 7/24/16. Barbara Kasten: Stages continues at MOCA Pacific Design Center.  This is the artist’s first major survey. Kasten is widely known for her photographic work, this exhibition this exhibition highlights Kasten’s nearly five-decades-long engagement with abstraction, light, and architectural form.Here the focus is on her early furniture design-based sculptures as well as her elaborately staged photographs of postmodern architecture.  Thru 8/14/16.

Cindy Sherman: Imitation of Life is the upcoming exhibition at the Broad Art Museum. It will feature an expansive representation of Sherman’s photographs from throughout her influential career of more than four decades. Her 1997 feature film, Office Killer will also be featured. Her widely known film stills series, as well as the less known rear projection series, both inspired by cinema of the 1950s and 1960s, play a central conceptual role in the show, and the show will include many works never before exhibited in Los Angeles. 6/11-10/2/16.