Alas! Museums are open and galleries are inviting us to visit. It has been a long time coming.  Hope that your summer gets off to a bright start.

Track 16 is featuring works by Eve Wood, On Any Given Day, an online exhibit that I highly recommend viewing. “In the title drawing On Any Given Day – perched on a smattering of grass – a blackbird with the body of a human observes the world. Animals appear to put in the work of observing just as Eve Wood puts in the work of processing: hurling her gauntlets of both passion and pain. Wood’s art, like the righteous fist thrusting out of a mountain of colored bird shit in Powering Through The Shit, is emphatic, unapologetic and droll. This exhibition of recent drawings faces the plight of our human condition head-on, as the pendulum swings from guilt to joy or terror into love. These works bear arms as if to demonstrate their fragility, but also to clarify any lingering human misunderstanding.” Thru June 29, 2021. 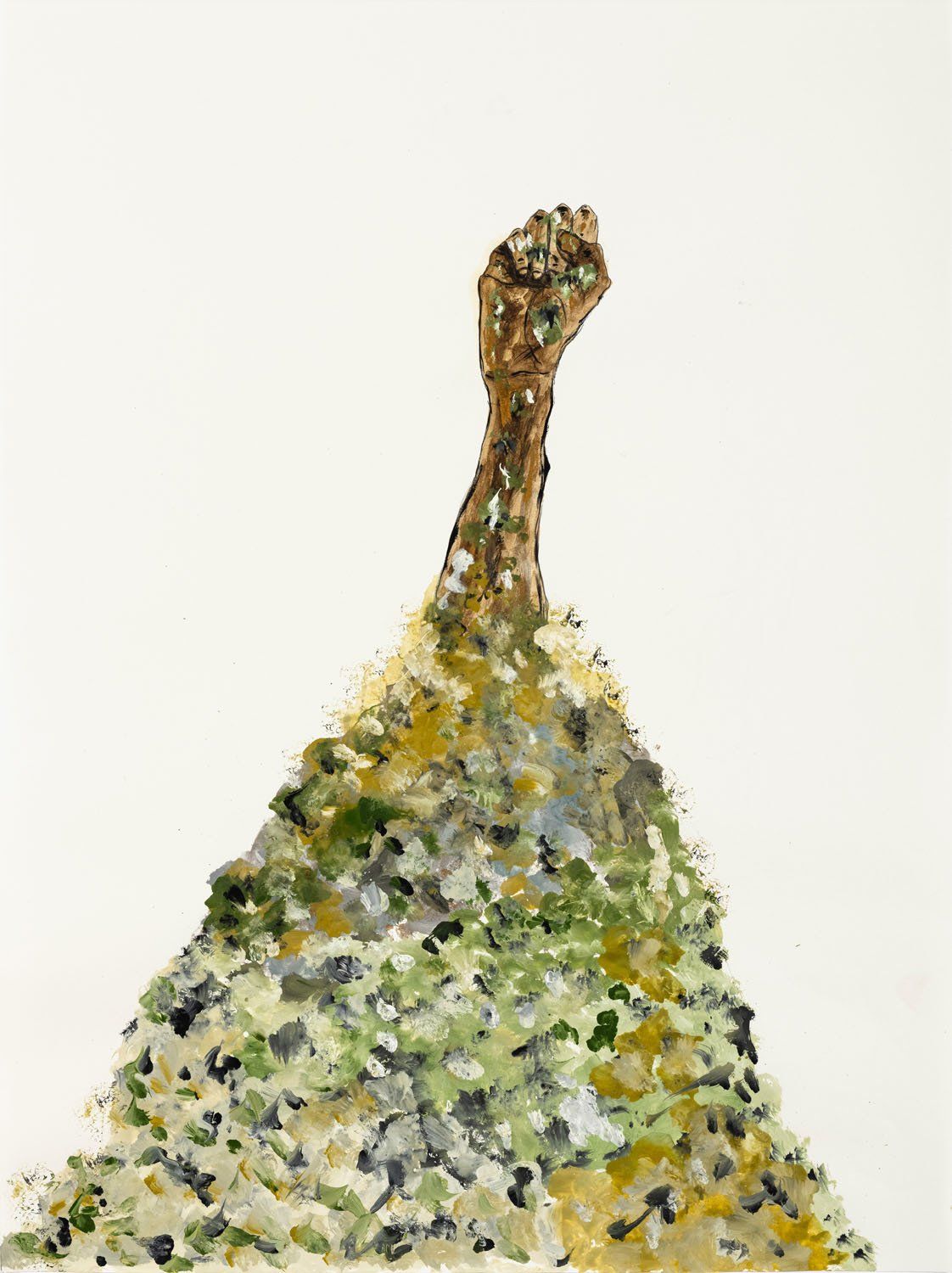 Eve Wood, Powering Through The Shit 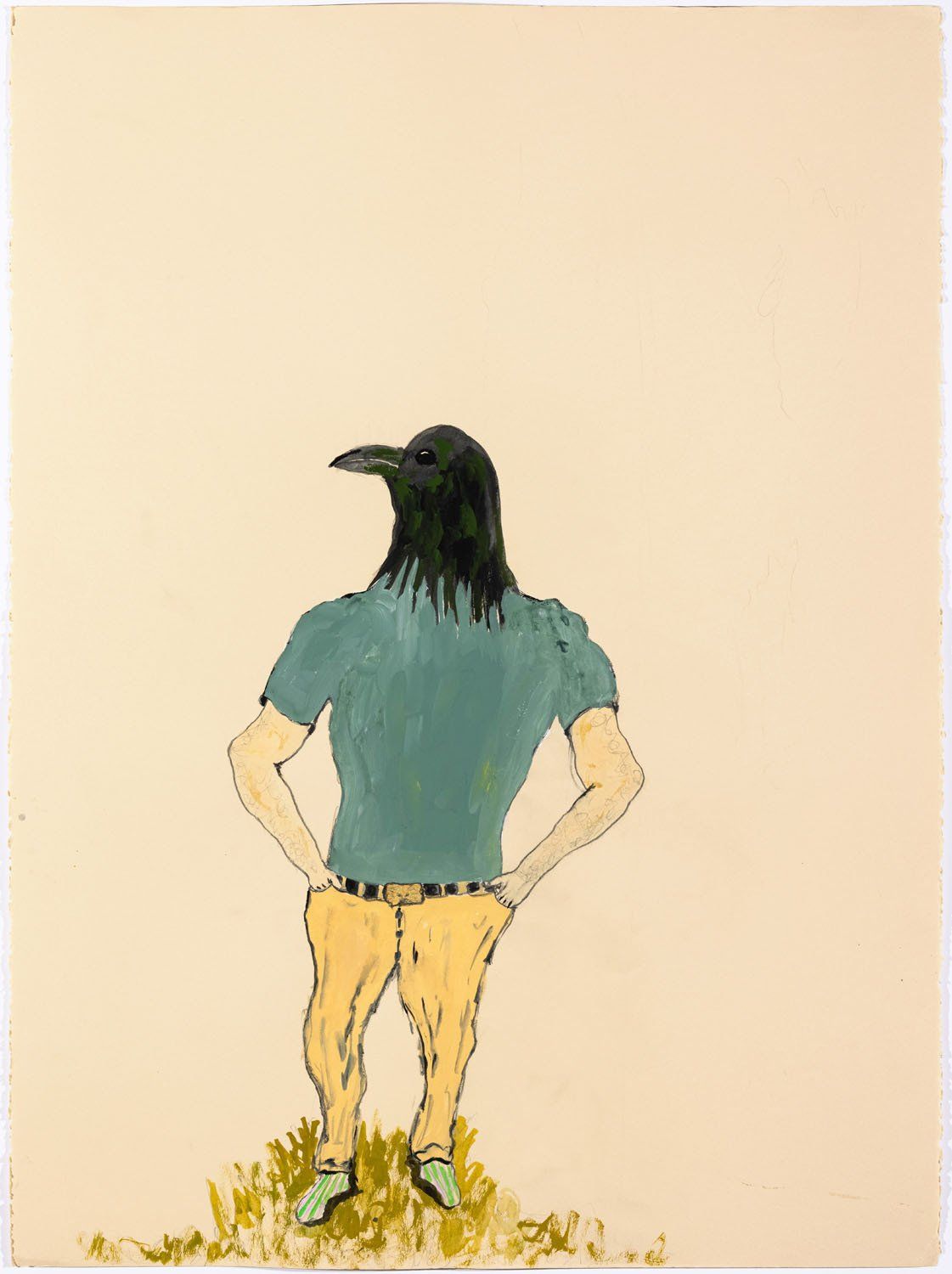 Eve Wood, On Any Given Day

Philip Martin Gallery presents Holly Coulis: Orbit. The exhibition is comprised of both abstract paintings and sculptures. She creates space though brushy lines and defined areas of applied paint, each outlined in color. The result is abstraction intersecting with the odd still life object, such as an orange. For her sculptures she wraps the components in colorful bands that point to the space between the second and third dimension. Thru July 2, 2021. 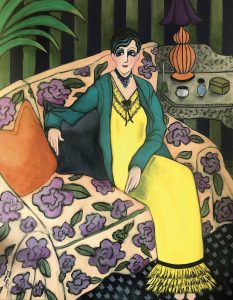 I was immediately drawn to the rather whimsical paintings by Maxine Smith currently in the exhibit, Maxine Smith: Won’t You Come IN ? at Skidmore Contemporary Art. In this series of paintings, Smith pays homage to the “wives, girlfriends, and lovers” behind some of the world’s most well-known modernist artists such as Picasso and Matisse. She invites us to question who they were. “Her paintings imagine Olga Picasso, the Russian ballet dancer who became the artist’s first wife, as well as Marie-Thérèse Walter, the seventeen-year-old French girl who replaced her in Picasso’s life.  Jeanne Hebuterne was the tragic mistress of Modigliani, who in an act of intense grief, committed suicide the day after he died. Alice B. Tolkas was the companion of Gertrude Stein and steadfast partner in their unconventional lifestyle. Also present are Viennese Expressionist Egon Schiele’s long-time mistress “Wally” Neuzil, and the more respectable Edith Harms, whom he eventually married. Madame Matisse is shown as a model of decorum while collector Peggy Guggenheim is depicted as a free spirit who had numerous affairs with the artists she collected.” (SCA) Their colorful portrayals delight us in our inquiry of their lives and influence. Thru June 26, 2021.

LA Louver is offering 2 outstanding  shows: Rebecca Campbell:  Infinite Density, Infinite Light and Heather Gwen Martin: Nerve Lines  and Fever Dreams.Over 20 paintings by Campbell  created in the last 3 years  are complemented by a multimedia sculpture installation. The title of the show comes from a succinct definition of a black hole; its seemingly contradictory attributes of density and light expanding to describe the beauty and fragility of life in our current moment exquisitely communicated through ethereal paint application.  Martin’s abstract oil paintings and a series of intimate gouache on paper in saturated tones were all created during the pandemic. They reflect the lockdown-heightened awareness of both the body in the world and the mind in the body.  She communicates the feeling of sun on skin with the bold, hot color of High Noon, and the tranquility of a quiet garden with the hothouse colors of Fever Dream.  Both thru July 2, 2021. 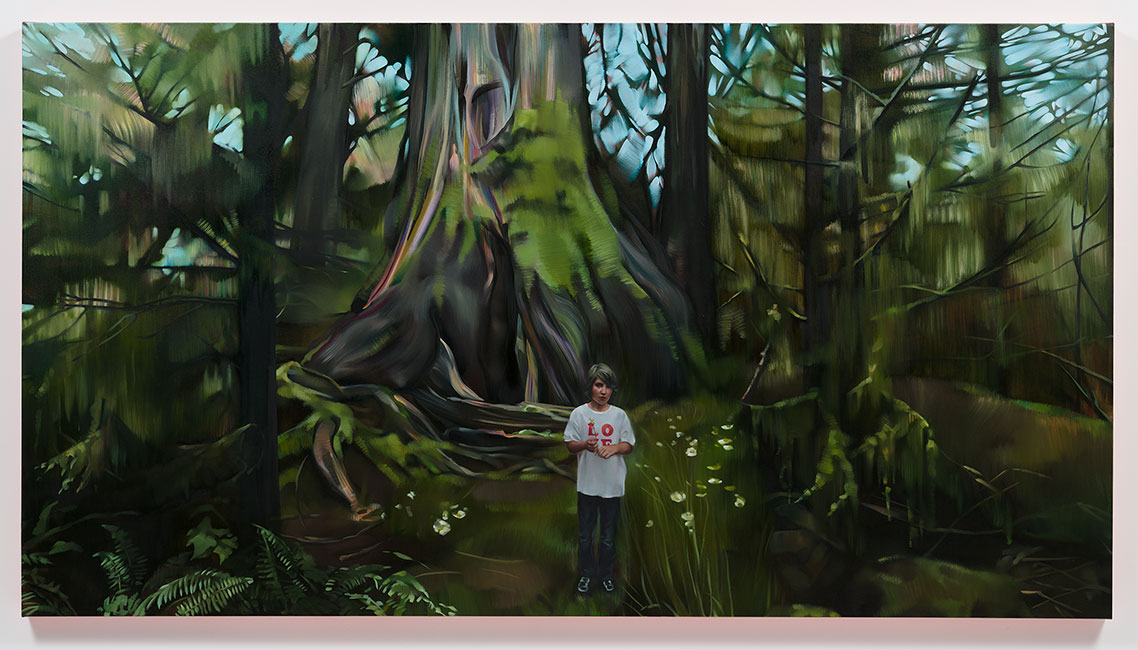 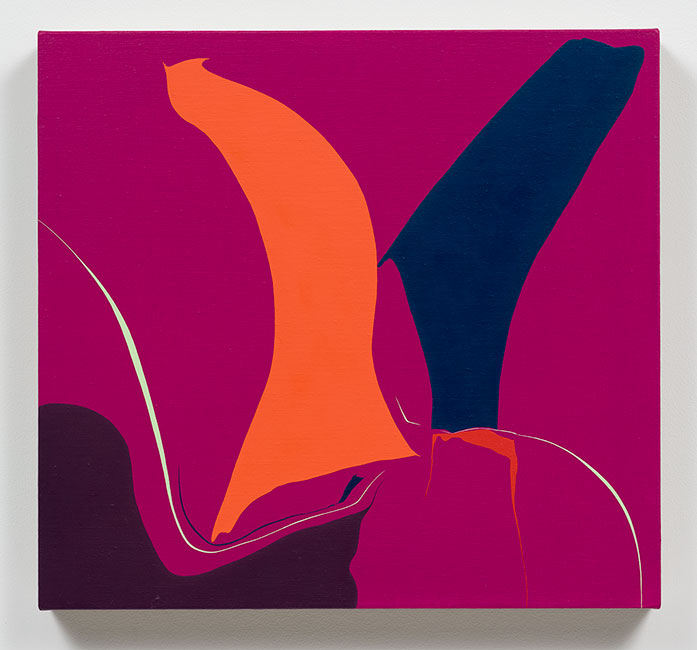 Melissa Meier: Laced/Skins/Masks is the current exhibit at bG Gallery.  Brazilian artist Melissa Meier is internationally recognized for her evocative 3-dimensional installations, found-object sculptures, collages and photography. Meier has chosen vintage doily patterns for her laced works and has superimposed them on the faces of female subjects. The shapes of the faces, expressions, and attitudes of the women dictate the choice of doily. Doily patterns are the ultimate symbol of elegance, femininity and propriety, yet one wonders if they also represent the repression of women. In her “Laced” works, the doily is cut into the face. Often, the more “dainty” and intricate the pattern, the more aggressive the mask appears. With “Skins”, she has created sculptural clothing hybrids, utilizing natural materials such as sticks, stones, moss, eggshells, wheat, rice, crystals, corn, feathers, pinecones, sweet gumballs, and shells. In Meier’s photographic staged scenes, her handmade clay masks are used as a form of expressed emotion rather than concealed disguise. Further, depending on how the variables work together, she is often surprised how each mask takes on its own personality, its own story. Although the masks are not sculpted realistically, they appear to breath and live, whether a person is posing behind them or not.  Thru June 7,  2021.

Mash Gallery’s current exhibition is PSYCH-O-DELIC: Works by Angela Johal and Haleh Mashian. Johal is a graphic artist from the Bay Area and whose colorful compositions are is juxtaposed with the vibrant figurative work of gallerist, Mashian. Thru June  26, 2021.

A recent visit with my mother took us to the beautifully designed Palm Springs Art Museum where we thoroughly enjoyed their current exhibition Agnes Pelton: Desert Transcendentalist. Although she painted conventional landscapes and portraits, Pelton (1881–1961) is most celebrated for her abstract compositions that reflect her interest in esoteric subjects and occult philosophies, including numerology and Agni Yoga with its principal focus on fire as a guiding force.  Thru September 6, 2021. 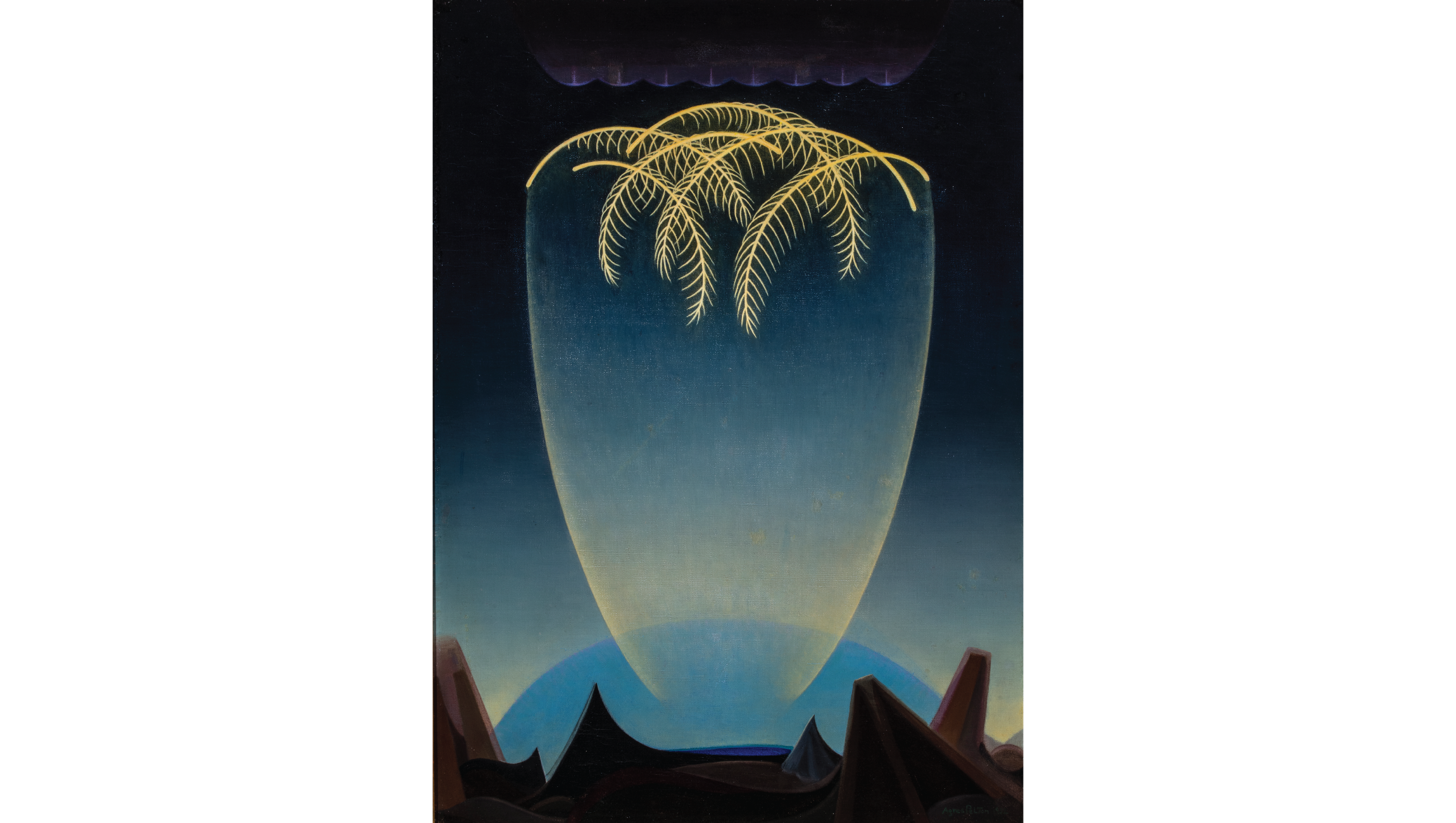 “In the exhibit, Bey, a Bahamian-American interdisciplinary artist presents an immersive installation that taps into Black Americans’ historical embrace of space travel and extraterrestrial visioning—a cultural movement dating back to the late 1960s and later termed Afrofuturism. Through this Afrofuturist lens, Bey reflects on subjects such as queerness, feminism, and internet culture in vibrant tableaux that combine living plants, video, music, photography, and oversized mixed-media paintings and textiles. The artist positions herself as an alien from the planet Atlantica, while her mission on Earth is to observe and report as an undercover agent. This imagined world and her general interest in storytelling come from her father, who would tell her childhood tales using alien narratives to illustrate how Black people were othered in the United States and The Bahamas. In contrast to the racial oppression and exploitation rampant on Earth, Atlantica offers a beautiful diasporic world in which Black people thrive and flourish.” (CAAM) Thru January 17, 2022. 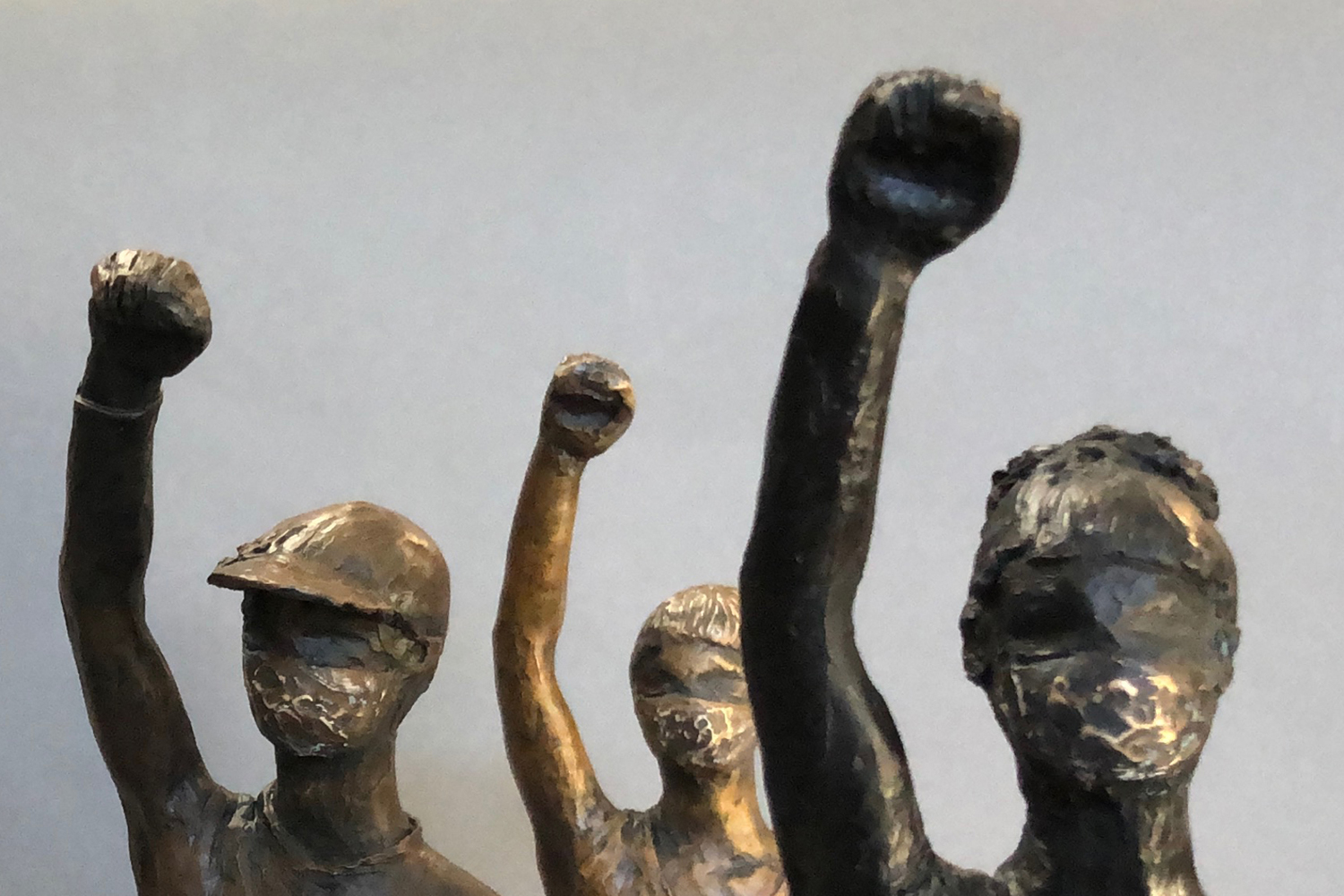